Stormzy and Wiley are setting the grime world on fire at the moment with their beef which has seemingly come out of nowhere, but what is the back story?

The grime legends have been publicly trading shots at each other on Twitter, before it escalated with full diss tracks and videos accompanying its release. It is the biggest grime beef since Chip and Buzgy Malone went at it.

Stormzy vs Wiley – What Started It?

It’s unclear what actually really started the Stormzy Wiley spat, but it was Wiley who came at Stormzy unprovoked.

It’s worth remembering, Stormzy has even released a track in tribute to Wiley in August of 2019 – Wiley Flow:

There was some confusion over whether it was a diss or a tribute but according to the Standard (I can’t find the original tweets), Wiley praised the tune, sharing a clip along with the caption: ‘My brudda 4 life @stormzy’, to be met with the reply: ‘Always love and respect legend #homage’.

However, the early signs of some tension (from Wiley’s side) came a little bit before that, as Stormzy’s collaboration with Ed Sheeran on hit track Take Me Back to London. 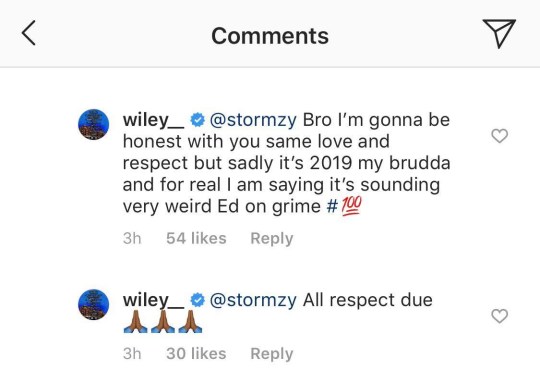 ‘Oh s*** so now Ed you wanna do grime yeah f***in ell mate (sic),’ he said, also admitting he was ‘sick of people using grime to look good for two minutes’. But the Shut Up rapper was quick to jump to the singer’s defence, replying: ‘No Wiley you know Ed been doing this from early, been a real one from early, can’t question that.

‘You know I love you and respect you brother but nah don’t do that.’ Wiley responded by saying: ‘Bro I’m gonna be honest with you, same love and respect but sadly it’s 2019 my brudda, and for real, I am saying it’s sounding very weird, Ed on grime,’ before adding: ‘all respect due’, and the 100 emoji.

Everything was quiet…until New Year’s day 2020 on Twitter when a fan asked Wiley if he was going to respond to JayKae who had dissed him on another track.

“Lol he is with Stormzy and Ed,’ Stormzy responded ‘I love you so much but you are so annoying f*****g hell.’

From there, it escalated pretty quickly: 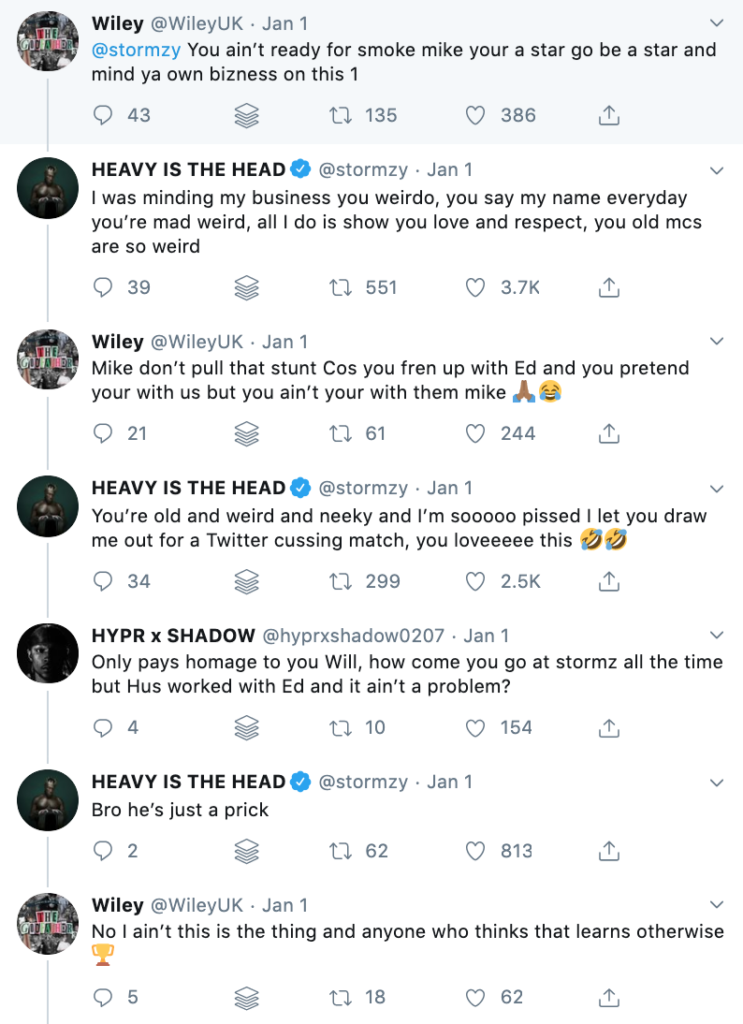 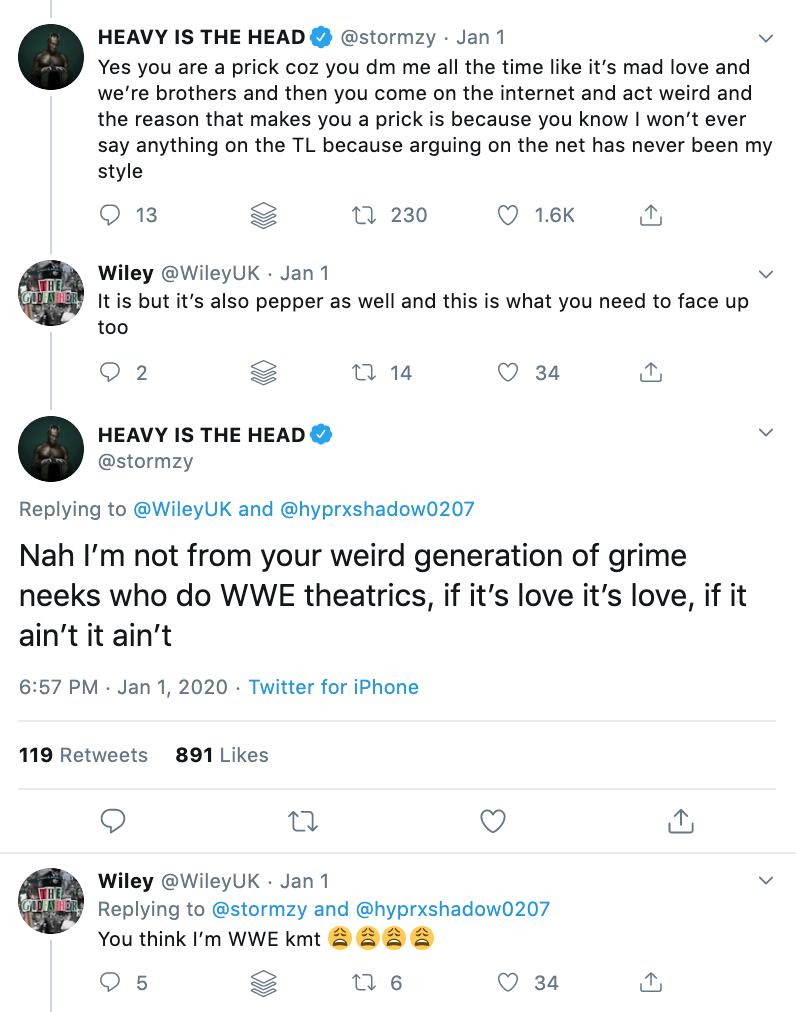 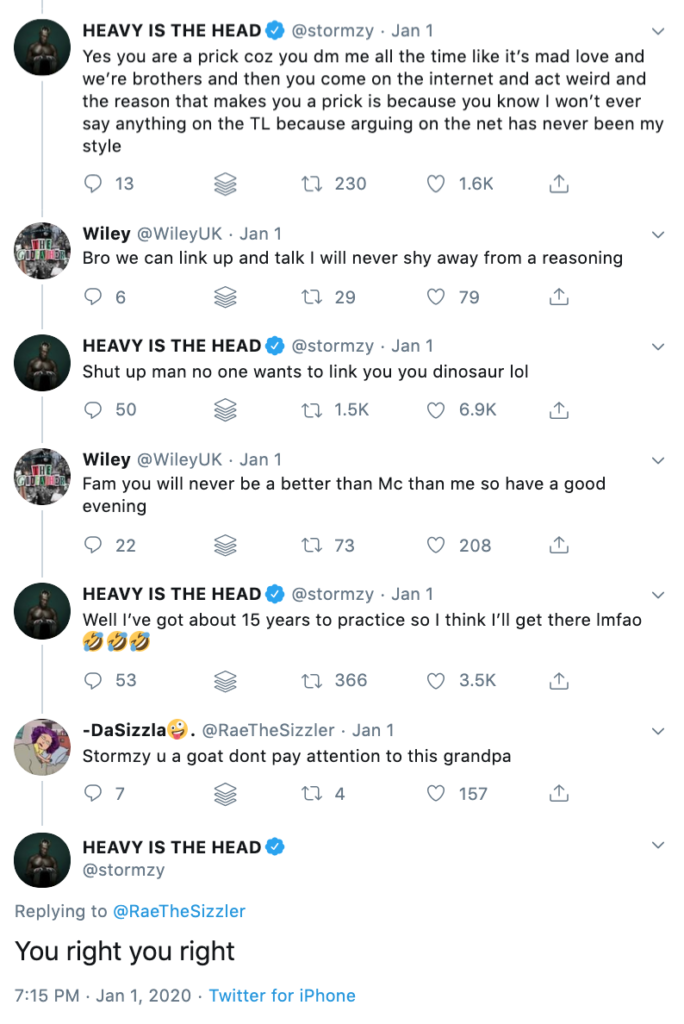 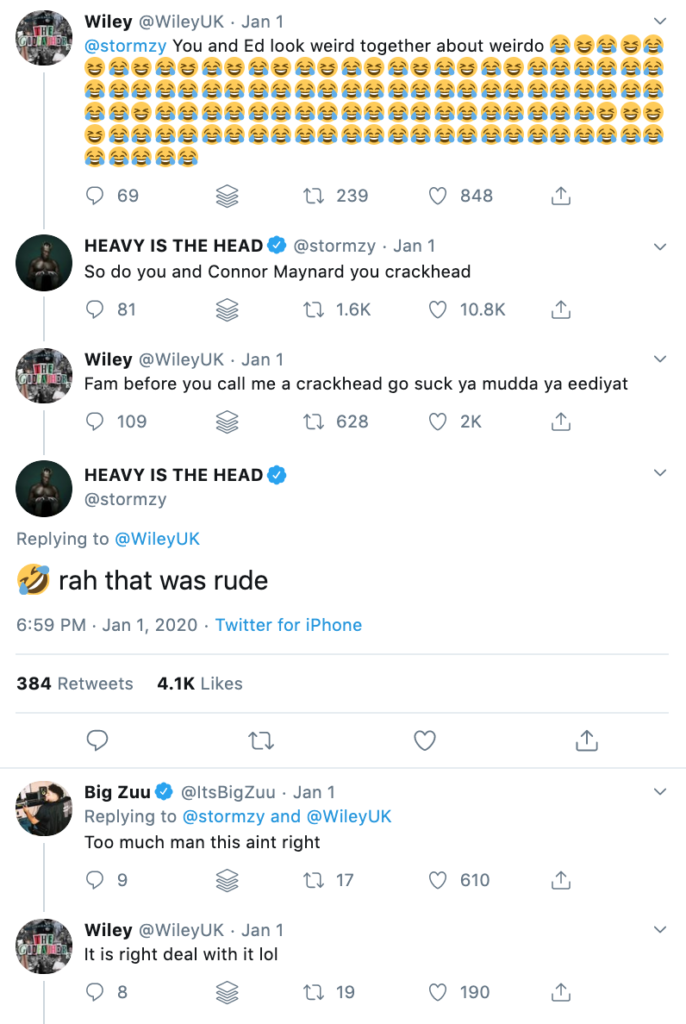 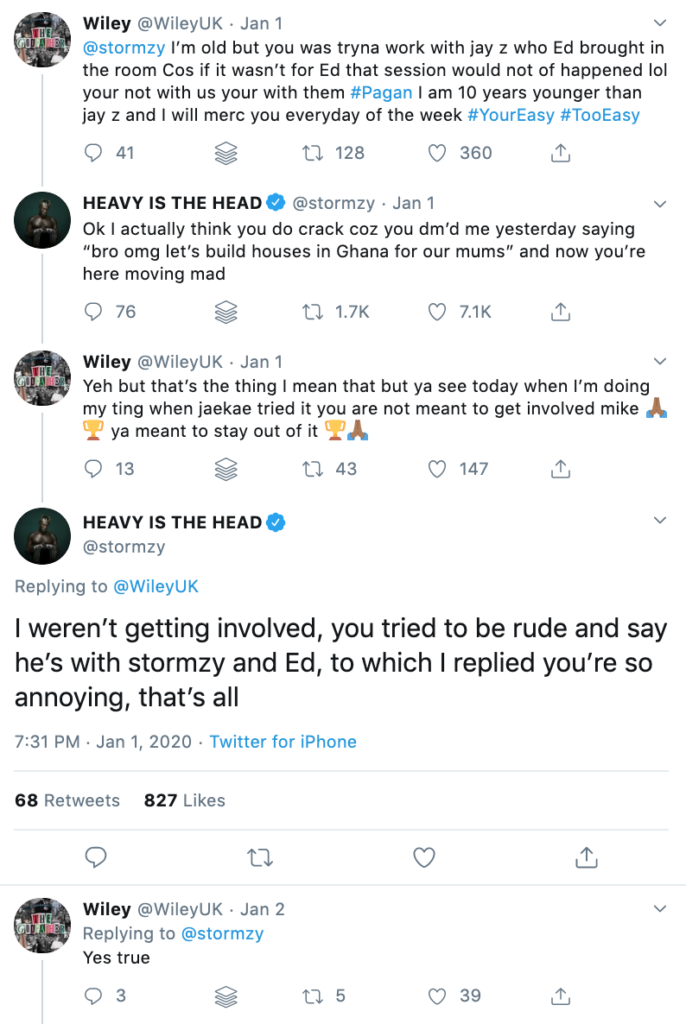 Whilst it appeared Wiley was getting more and more wound up, Stormzy responded to another fan he trolling a little: 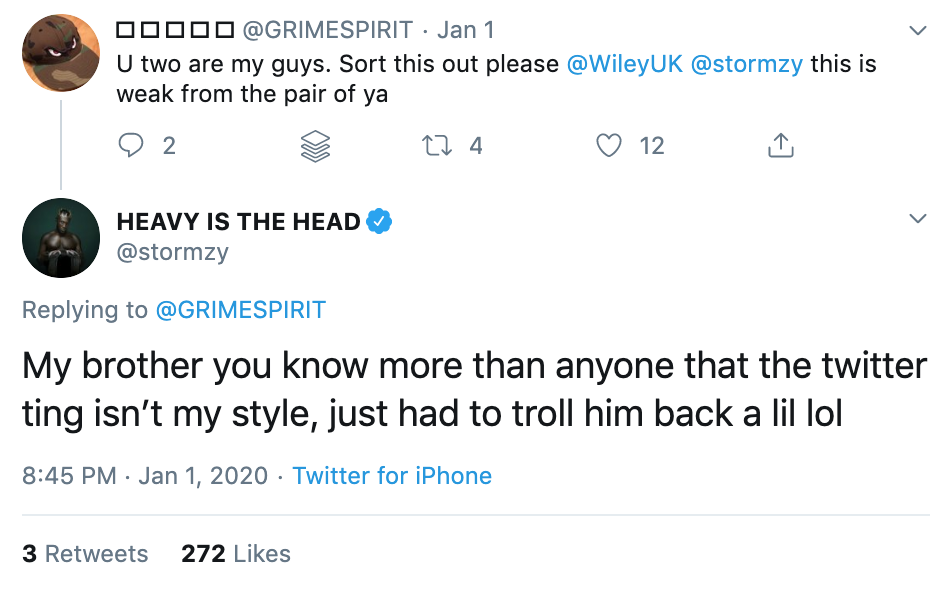 Meanwhile, it became a clear a diss track was soon coming.

Wiley – as expected – was first to strike, releasing Eediyat Skengman.

“Yeah, I know he came from the hood and that, But if the vibes that we built were drugs and we packed / We’d be stacking, and he come along and took all that.”

He continued: “You never cared about grime, you just used it / Worse than Ed with your watered down music.”

And perhaps crossing a line, he named dropped Stormzy’s ex-girlfriend Maya Jama only to say he wasn’t going to talk about her. “I ain’t gonna chat any shit about Maya, she’s cool, So we ain’t gonna do the whole Maya ting,” he said.

This one caught everybody off guard. No-one expected Stormzy to actually respond but he did and the results spoke for themselves; it trended #1 on YouTube, breaking a million views pretty quickly, whilst the 1 minute snippet also broke 1 million on Twitter, with a quick 10,000 RTs as Stormzy posted it with the caption ‘DINOSAUR’ in reference to his ribbing of Wiley’s age: 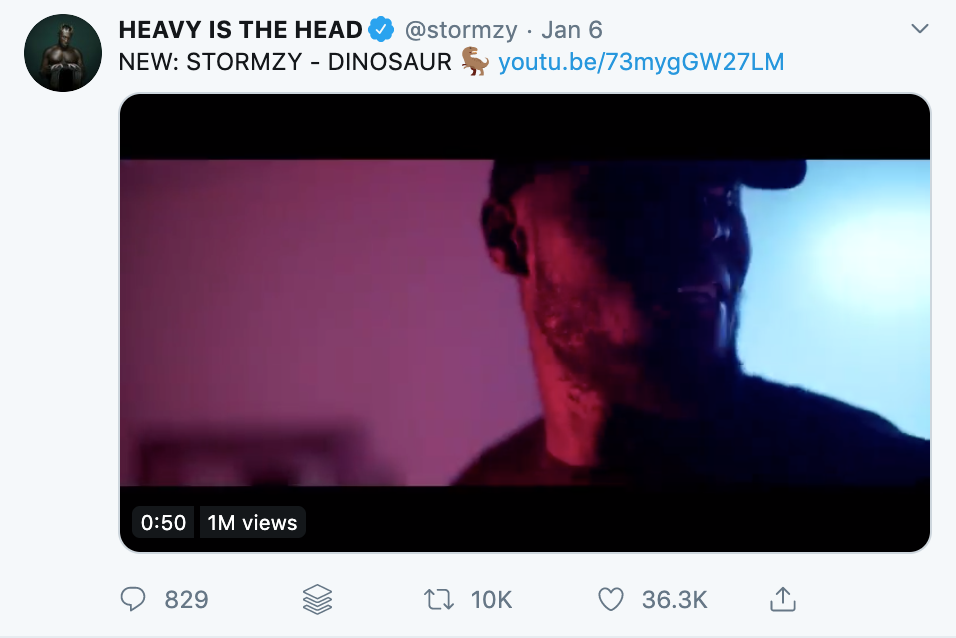 “I came to your show, and moved to your brother in front of your dad,” he rapped. “Your old man just stood there pissed / I said pops, why you look so sad? Then you brought me out on stage right after, You fucking prick.” Cue the memes.

“Go and back your bro before you suck my dick / About suck your mum, I soon bust your lip.”

Although Wiley denied using drugs over the weekend, Stormzy has still branded him a “crackhead cunt”.

Though Stormzy’s response got the most traction online (with a bigger fan base, it’s to be expected regardless of the content), Wiley and a ton of fans on Twitter criticised him for calling himself the King of Grime but doing his dub on a drill beat.

Chip then starts trending on Twitter, getting everyone even more hype as people were asking for him to get involved, but he quickly let people know he isn’t touching it:

Just when you think it’s all over, of course Wiley can’t leave it. He continues to fire shots, sharing videos of Stormzy and continously pointing to his relationship with Maya Jama. 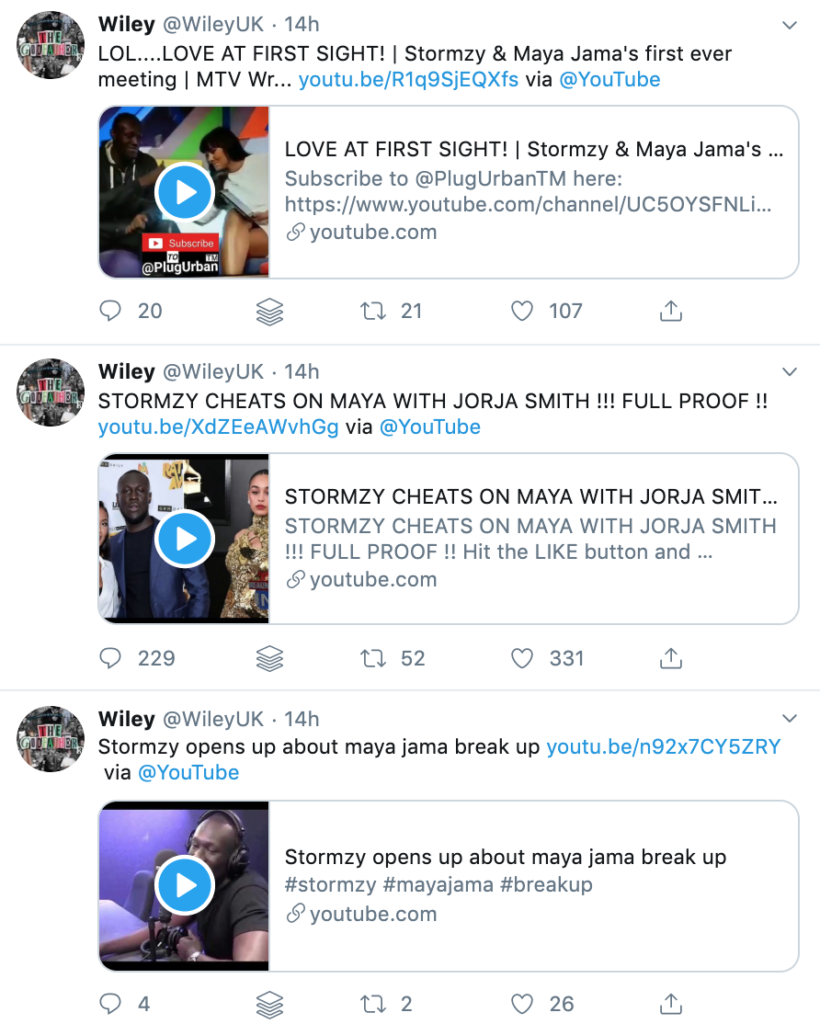 Wiley reveals on Twitter he’s got another dub coming, releasing a snippet with the cover art: 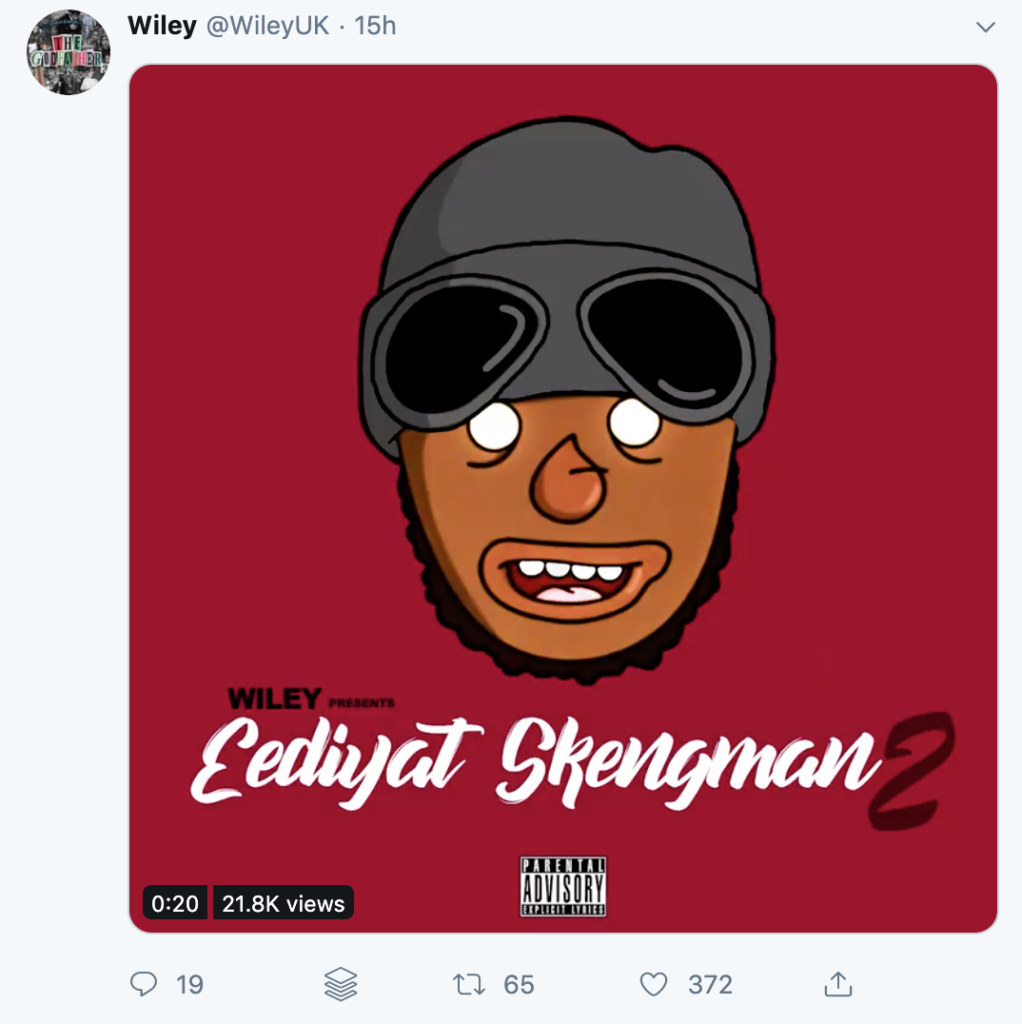 “Before I drop this next dub I just wanna say #ThisIsGrime,” he tweeted, clearly relishing it. However, he says he won’t drop the Stormzy dub until he hits 500k followers, asking for the extra 20k to release it.

Wiley was unable to wait. About 17.5k followers short of the 500k he wanted for the release, Eediyat Skengman 2 dropped (though on some weird random YouTube channel) and had some pretty scathing bars including: “I’ve done more for you than your dad has” and “If I see your mum down Croydon market I’m going to rip that weave off her head”.

Wiley releases the official video at 18:45pm, but whilst it is premiering on YouTube, Stormzy has a surprise of his own…
18:59pm

“Why do you love to talk about mums so much…where’s yours?”…and from there, you knew Stormzy was about to not hold back. Within 10 minutes of Wiley dropping the video, Stormzy has dropped Still Disappointed, and pretty much destroyed Wiley’s entire family tree, focusing on Wiley apparently moving his mum to Cyprus…”One day there’s dons at the door then next day Heathrow Terminal 4”.

It’s not over though. Stormzy finished with you’ve got 24 hours to reply, and Wiley took straight to Instagram with the cover art for Eediyat Skengman 3… 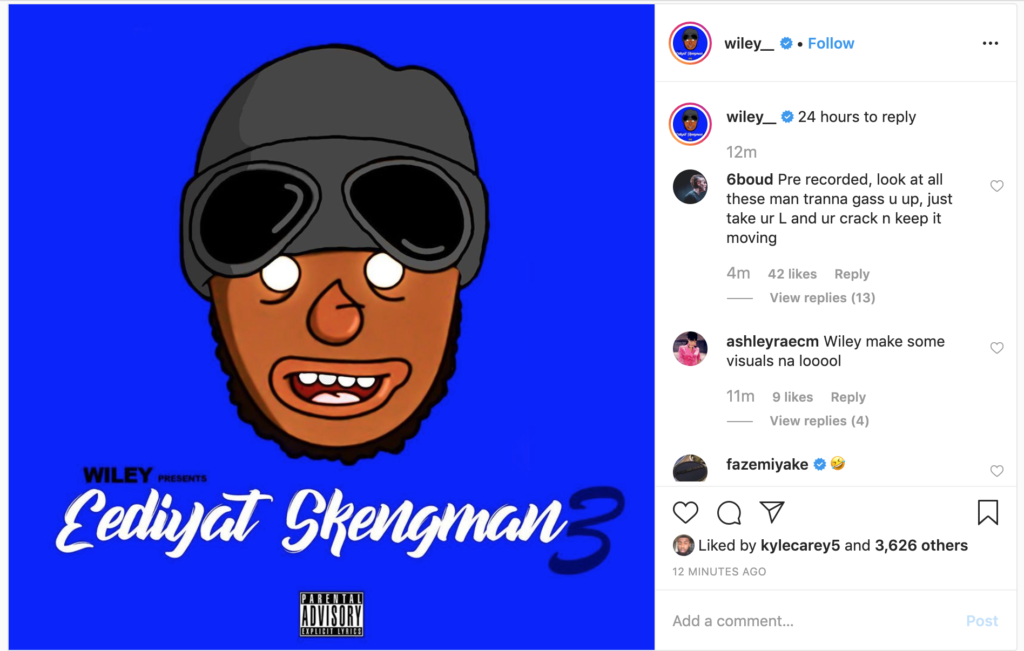 And tweeted his next one is going to be the final nail in the coffin:

And perhaps in a sign of how grime is cutting into the mainstream, even Sky News is covering the beef.

Friday January 10th 2020
Wiley finally drops his response, but doesn’t drop a video or put it on YouTube to begin with, asking for people to pay for it on iTunes as he looks to cash in on the hype. Didn’t take long for someone else to upload it to YouTube – before he dropped it on his own channel (above).

Then came the official video:

Monday January 13th 2020
Whilst in the US, Stormzy jumped on to Ebro in the Morning on Hot 97 and opened up on a variety of topics including his beef with Wiley, saying “I got the W, I won it”, as he emphasised people think he’s commercial and forget the essence of what he is is a bar-er.

Stormzy actually thanked Wiley for giving him an opportunity to show people he can war.

“The heights I’ve reached, that’s been the chink my armour kind of – (people say) ‘he’s the commercial, he’s not really…’ It’s like bruv, naturally, that’s first and foremost before anything I’m an MC, a bar-er, a spitter, that’s where I’m most comfortable,” Stormzy said.

Talking of how the beef started, he added:

“To be fair, that’s Wiley, that’s what he does. He’s been doing that for a very long time.

“I’m the new kid, the torch bearer right now. The Wiley thing is just he’s a bit of a troll innit, by nature, that’s not even a disrespect. We had a little twitter exchange, he did the grime thing which is to go on record and send for me.

“I’ve always held him in the highest regard.”

But when asked if he still did hold him in high regard, Stormzy responded:

He said he wasn’t going to talk more about his bars aimed at Wiley regarding his mum having to move to Cyprus, as “it’s all on record, to be fair” – but reiterated that it’s all true.

Before the interview concluded he was asked if him and Wiley could ever be cool, and he responded that he isn’t sure, and is getting tired of having paid non-stop homage to his elders only for them to keep firing shots.

Ironically, there was also news that Still Disappointed was heading to the Top 40: 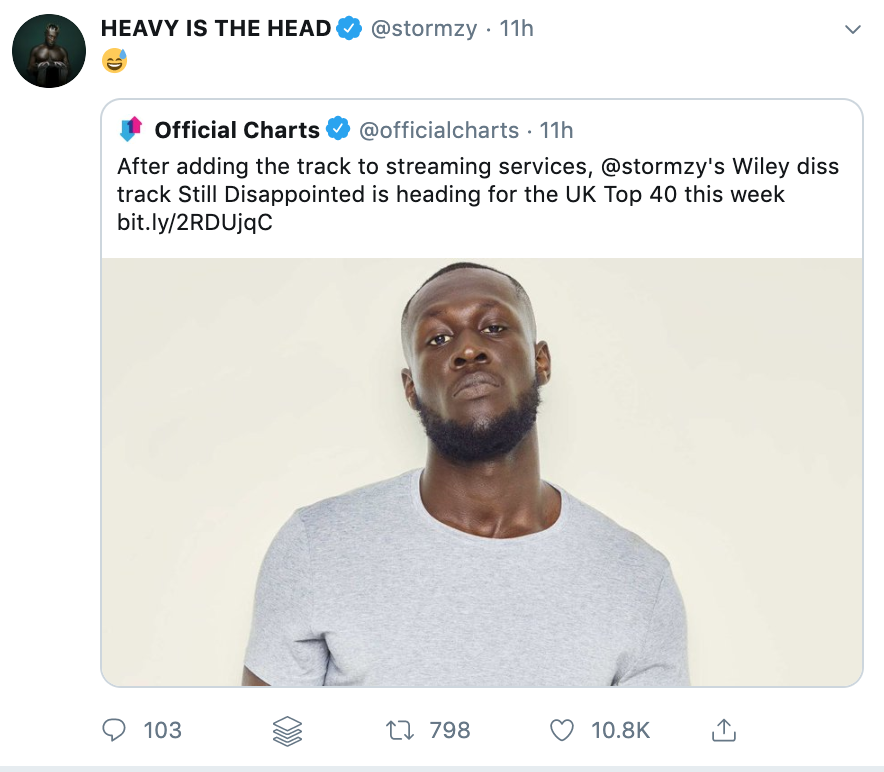 Who you got? Stormzy or Wiley?