By far the hottest grime beef of 2015 sees newcomer from Manchester, Bugzy Malone, take on veteran of the game, Chip.

About to put #MannyOnTheMap @CharlieSloth they're not ready uno fam!! Tune Into @1Xtra right now!!

It was Manchester’s Bugzy who first sent for Chip, in his debut Fire in the Booth which has now surpassed 10million views.

The send for Chip includes the lyrics Go tell Chipmunk not to be cheeky/Grime is a road ting, my man’s hopeless/Go make a pop tune, fuck your A’s and B’s/You went from Chip Diddy Chip to The Streets/Oopsy Daisy, I’m not in your league; finishing the verse with So fuck Chipmunk n his A’s n B’s.

It took all of six days for Chip to respond lyrically to the call out, releasing Pepper Riddim on his own YouTube channel. Though he did drop this sub-tweet:

The name you can ride off… CHIPMUNK!

Now with over 3million views, Pepper Riddim wasn’t directed solely at Bugzy but had some strong words for him, the most fiery being a direct reply to his Fire in the Booth Lyrics; “About fuck having As and Bs or something, man sound like they can’t read or something/That’s why you’re stuck on this road ting, cah in music you ain’t achieving nothing.

Five days later, Bugzy comes straight back at Chip with ‘Relegation Riddim’ – going directly at him throughout the entire track with some hard bars. “With that shit on the back of his head/He looks like Sonic the Hedgehog from Sega/I thought you was signed to a major/I don’t think your label’s paid ya/Because I heard you spent your money/Hiring Chris Brown out for the day cause/But you still didn’t even chart proper
Going on like your a chart topper/Chris Brown was dancing on a bus/Then he hit Ri-Ri with a show-stopper/But you’re not in the history book to be honest/No one could give a fuck/Everybody knows Alvin is a punk/He’s was like Chris Brown featuring Chipmunk.”

Four days after ‘The End’ Bugzy ensured it wasn’t the end, with ‘The Revival’ – a hard hitting track addressing his rise to prominence over the past two months. “I’m the grime scene saviour, not you, not you, not you,” goes the hook. Before adding “I’m the Chipmunk relegator.” He then goes directly at Chip again: “Charlie Sloth told them I’m an animal then I ripped Chip to bits and I’m in a different league,” before continuing in and accusing Chip of being a snitch.

It took him five months, but when Chip came for Bugzy, he came HARD. In what was called ‘The Hat Trick’ – Chip released three separate diss tracks for Bugzy across the three biggest urban music channels on YouTube.

The first of the tracks was ‘Light Work’, which drew sum criticism with the irony of it taking five months to release. Buy on iTunes.

“About I took longer than Meek, sonic BOOM hold two in a week!” Chip started ‘Run Out Riddim’ for his second verbal assault on Bugzy in three days – the opening set the tone for the rest of the diss which fully went in.

“Call me hat-trick hero, cuz,” Chip started the third diss with and it truly was a hat trick.

If three wasn’t enough, Chip wait another three weeks before releasing his own 96 bars of Revenge over the legendary JME instrumental. Also dissing Tinie Tempah in the track, Chip once again came for Bugzy – “How the fuck has he done more for grime than me this year? I opened up the scene this year, gave birth to this ediat brare”. It was his fourth straight Bugzy diss without a response.

In amongst all this madness, Chip had done an appearance on Westwood where he continued to take shots at Bugzy. The video was released online on October 21st (along with everything else – see below).

It seemed like four (five including the Westwood appearance) was enough for Bugzy, who jumped back in with the track Wasteman.

“You look like a frog with a beard” – buy Wasteman on iTunes.

Chip immediately responded to the Bugzy release promising his fans to stay tuned for 11pm on Instagram:

It came three hours late, but was worth the wait as in less than 8 hours from Bugzy’s original drop Chip responds as he drops the video for “Dickhead”.

This comes following a mad week which has seen Chip drop “96 Bars Of Revenge” – sending for Bugzy Malone – and “Coward” which took shots at Tinie Tempah. Buy Dickhead on iTunes.

However – the quick response backfired as it was a pre-recorded track with no direct references to the bars Chip had sprayed in Dickhead. Buy Zombie Riddim on iTunes.

Just when we thought it was all over, out of nowhere Chip releases a response to Zombie Riddim with Duppy Riddim. Using the old school Chippy flow, Chip directly addresses being called a snitch saying “You wanna chat about snitch/every song you make you snitch on yourself”.

Out of nowhere, following Bugzy not taking home an award at the Mobos, Chip drops another huge diss track for Bugzy Malone. Hinting to it earlier in the day on Twitter:

The green lambo he is referring to:

Wiley jumped in and said this should be the last diss:

Bro I really feel like you have said enough now @OfficialChip . #Alone is the last pepper bro

But Chip wasn’t having it:

Understand this elders. Gods. Kings. I WILL PEPPER FOR AS LONG AS I BOMBOCLART WANT!!! No one will enter the game 2016 THAT way. Not again.

To which Wiley responded:

@OfficialChip Bro don't over do it if you know your a better mc .Thats all I'm saying .

12th December 2017
Beef squashed? Both Chip and Bugzy took to their Instagram accounts to share a picture, showing them both together at Giggs’ Christmas dinner: 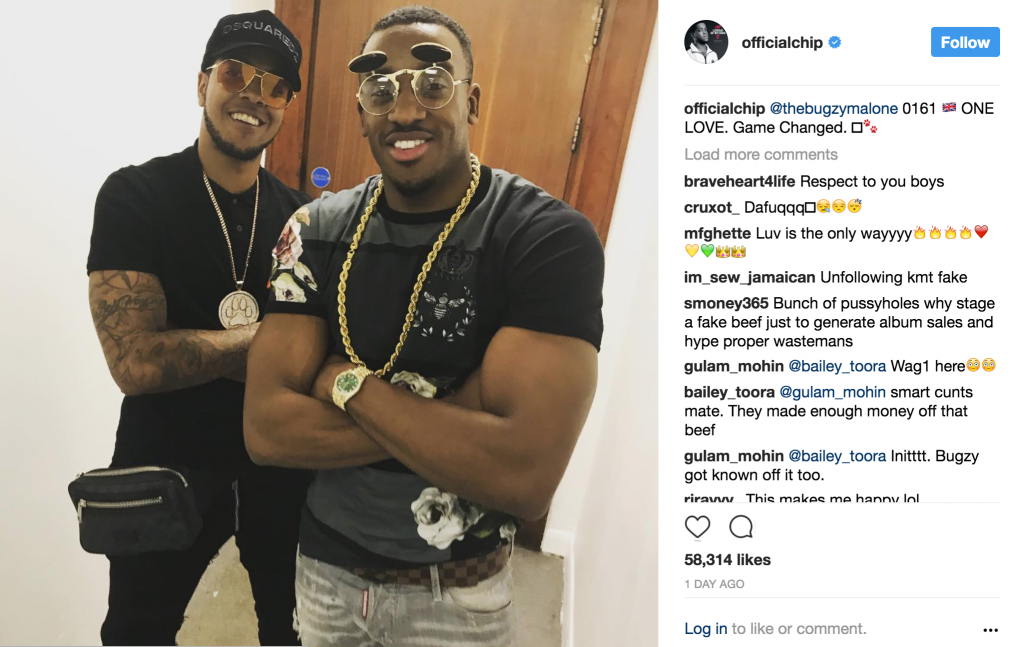 And then video proof, incase you doubted it: